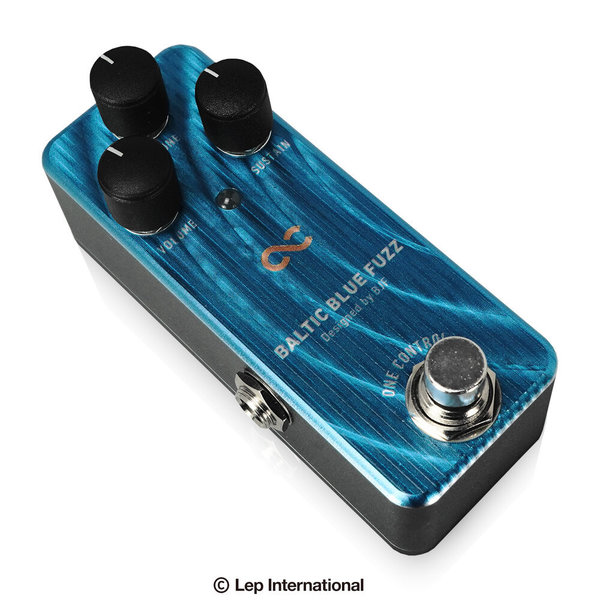 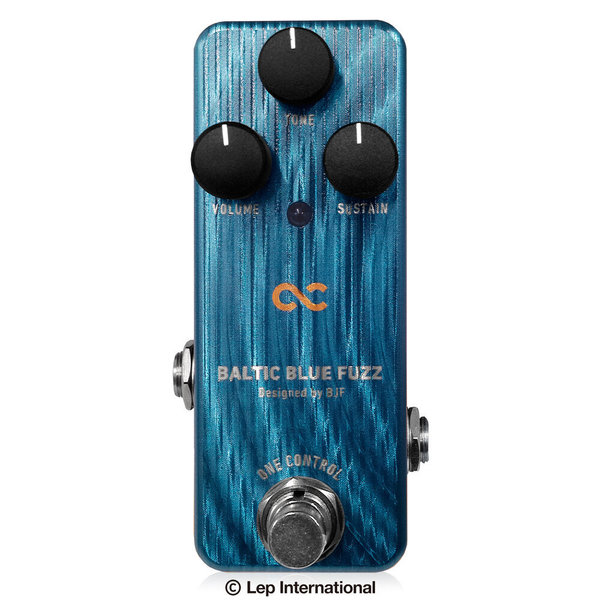 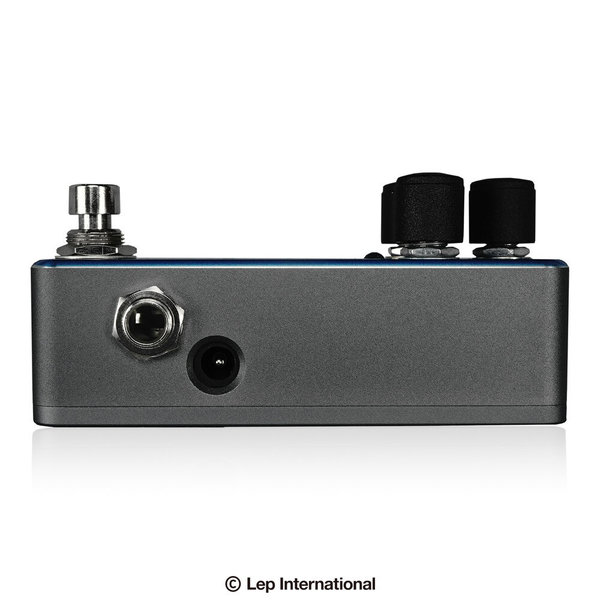 "After receiving the Baltic Blue Fuzz (BBF), I tested it with various guitars and amps. With the humbucker guitars, BBF creates focused and fine sound and easily gives a tone like that of Carlos Santana."

Now when it's connected with the Stratocaster with the BJF/Lundgren set, the sound reminded me of the record I listened to in my brother?s bedroom back in the 70s. My Hiwatt amp does not produce Gilmore like sound even with the Big Muff but the BBF did. You can certainly enjoy it with a P-90 or Telecaster as well. With the low-impedance active pickup guitar, the filtering response changes and creates a modern fuzz tone at the same time. Placing a JF Buffer before the BBF using a passive pickup yielded the similar effect.
The BBF allows you to set the sound easily with British amps or fender amps like the 1967 Super Reverb. It produces modern tone when it is connected after a booster like the Granith Grey Booster (GGB). If its?s connected before the GGB, you can set two volume levels. It?s recommended either way.

Another legend is born.

His ears, senses and passion have finally created the first fuzz pedal for OneControl. It produces a sound that we have imagined and heard, but never before experienced. We look back into the past and into the future, and created the sounds right in the present moment. OneControl and BJF have created another legend.

There have been various fuzz pedals throughout history. They have created many legends and attracted countless guitar players seeking a vintage fuzz tone. The Electro-Harmonix Big Muff Pi stands out amongst these, boasting decades of glorious achievements and outstanding reputation. It is one of the rare fuzz pedals in the world that has continued to evolve.
Mike Matthews once described the Big Muff circuit as fuzz through robust filters. The One Control Baltic Blue Fuzz is a new generation vintage fuzz pedal designed by BJF based on this idea.
The world?s first fuzz pedal is supposedly the Maestro Fuzz Tone FZ-1 from 1962. This fuzz pedal was originally developed in the United States, and was later refined in 1965 and reborn as the FZ-1A.
However, at the same time there was another fuzz pedal that became a legend in the U.K. This was the Tone Bender developed by Gary Hurst. This pedal had a tone that was influenced by the FZ-1 circuit but was known for its original tone. Since launching the first generation Mk1, successive models had been developed including the Mk1.5 in the transitional year 1966 and Mk2 as well as their clone models and improved versions or OEM models. It increased the popularity of fuzz pedals tremendously. In 1966, the internationally renowned Fuzz Face was launched. This pedal is not only as famous as the Tone Bender but also is known for its circuit being similar to the Mk1.5, a version of the Tone Bender made during its transition period. The Tone Bender was also upgraded to the Mk3 in 1968 and the Mk4 in 1969. Fuzz pedals have matured over time from the original FZ-1 to many various models. In response to these British fuzz pedals, Bob Mayer in New York developed a fuzz pedal in 1969. He was an engineer at Electro-Harmonix and his fuzz pedal was the first Big Muff Pi, which is now called the Triangle. This model was sold until sometime around 1973, and after that, it was upgraded to a model called Ram?s Head with an improved housing. The Big Muff Pi is basically a fuzz pedal newly developed after the initial development in the U.S. and polished in the U.K. It?s a result of repeated research on fuzz pedals and provides the original fuzz sound that today?s guitarists seek.

The Baltic Blue Fuzz circuit is not a Big Muff clone but shares the same topology.
Some of the tones modern guitarists seek in Big Muff are those of Triangle and Ram?s Head. Despite the difference in actual devices, Triangle and Ram?s Head have almost identical circuits and their tunes are very similar as well. The Baltic Blue Fuzz is created to produce a tone that this generation wants. Reproducing the vintage fuzz tone is something all builders in the world are working on now. If they want to replicate the old time sound, they need to be very specific about the vintage NOS components, housing, pots, and circuit patterns.

OneControl BJF series used an overwhelmingly small housing to provide an effector that has the original circuit designed by BJF and uses commonly available components. We think it?s important to create a model that is universal and easily available in any situation.

BJF combined multiple amplifying stages and filters when designing the Baltic Blue Fuzz. Although the idea behind this design is from Big Muff, he used an Op-Amp in order to ensure stability and match modern components in general.
Imagine the initial Big Muff. The sounds associated with Triangle and Ram?s Head are what the Baltic Blue Fuzz is trying to provide. We want to make sure you get the sound you image as soon as you turn on the effect. The sound also needs to be crisp and come forward in the ensemble. The Baltic Blue Fuzz is a pedal you can casually carry on your pedal board or in a gig bag and rely on like overdrive and distortion pedals whenever you want the vintage muff sound.

The Baltic Blue Fuzz is a pedal for creating a vintage muff sound but at the same time emphasizes the crisp sound that comes forward. Thus, while maintaining the same gain range as the vintage Big Muff, adjustments were made to ensure a slightly tighter and lower gain than the original. It was tuned to be used with electric guitars and filtered to create powerful feedback tones. It is free of the peakiness that is common among vintage fuzz pedals or other clone models and increases playing stability.

BJF added Tone control to the Baltic Blue Fuzz that is incomparably easier to use than the vintage original model. It is designed in a way so that guitar tones can be adjusted in the full knob range without being destroyed. It also highly responsive and knob movements are reflected in sounds immediately. One legendary guitar player prepared and used a number of fuzz boxes to attain the sound he wanted in a particular moment. With Baltic Blue Fuzz, just turning the Tone knob lets you find the sound you want.

Vintage fuzz pedals have some kind of magic power. Authentic vintage fuzz pedals, considered to be legendary, are great indeed. High-end clone models that are created after repeated research and elaboration in an attempt to reproduce the tones have the same overwhelming power as well.

The Baltic Blue Fuzz is neither a vintage fuzz pedal nor a pedal whose sole purpose is to reproduce the tone it makes. It is a friendly and portable vintage muff pedal that gives you the freedom to control the immediately recognizable vintage muff tone according to your preference and equipment.

*Electro-Harmonix, Big Muff Pi, Maestro, Fuzz Tone, FZ-1, FZ-1A, Tone Bender, and Fuzz Face in the body text are used for explanation purposes only and we have no association with New Sensor Corp, Gibson Guitar Corporation, or Dunlop Manufacturing, Inc.