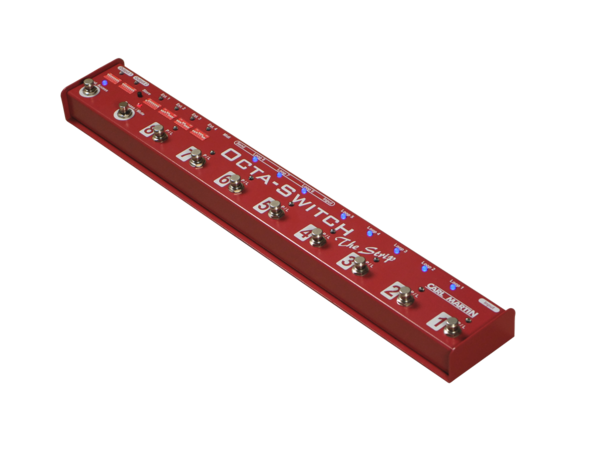 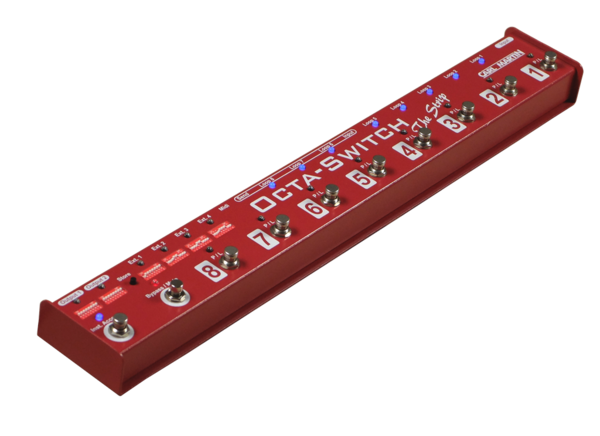 The Carl Martin Octa-Switch, already a legend in the guitar effect switching world, is on it's third evolution since the original. These all analog units have received rave reviews throughout the guitar world and awards from companies like Premier Guitar.

4th Generation of Octa-Switch
The fourth version, named 'The Strip' is the smallest and most advanced, taking all the technology used in the first three and adding some amazing features that make the Octa-Switch "The Strip" the most versatile and simplest all-analog switching pedal on the market!

All things that made Octa-Switch a global success
At first glance, Octa-Switch "The Strip" (designed once again and refined by Thomas Guldman), has all the same features as before. There are 8 fx Loops that can be programmed into 8 Banks. The Loops are all True-Bypass, impedance free gold relays so you can run all your pedals (old and new) without issue. The Main Input can be True Bypass, or it can be switched to Buffered for large stages or long cable runs. There are 8 blue LED's that indicate which of the 8 Loops is being used, and 8 green LED's that indicate which Bank is being used. This is where the technology changes.....
What's new on "The Strip"?Loops 6, 7 & 8 can be removed from the front-end signal chain and put into an amplifier’s FX loop, without sacrificing one of the 8 loops. Therefore we added a dedicated input and send jack for this section. The Bypass/Mute switch can operate as an overall bypass to the unit or mute the signal.There are 8 blue LEDs that indicate which of the 8 loops is being used, and 8 green LEDs that indicate which bank is being used. Each bank (Preset) allows any combination of the 8 loops being used simultaneously. The 4 external switches can be used for switching amp channels, reverb, boost, or any other device that offers external switching, also freely assignable. Another feature is the instant access switch, which allows to add/remove any of the 8 loops within a bank (Preset), without changing the actual preset.

Easy MIDI Switching
“The Strip” is the first Octa-Switch to feature simple and easy MIDI switching. It sends out program change messages (1-8) for the respective banks (presets) of the Octa-Switch. Programming the Octa-Switch is easy and follows the “what you see is what you get” approach.